Bridge Electric’s team brings together many specialists to solve your electrical needs. Their combined technical knowledge and field experience provides a complete offering of electrical services for the entire life cycle of your project including; budgeting, electrical design, construction, and building maintenance. 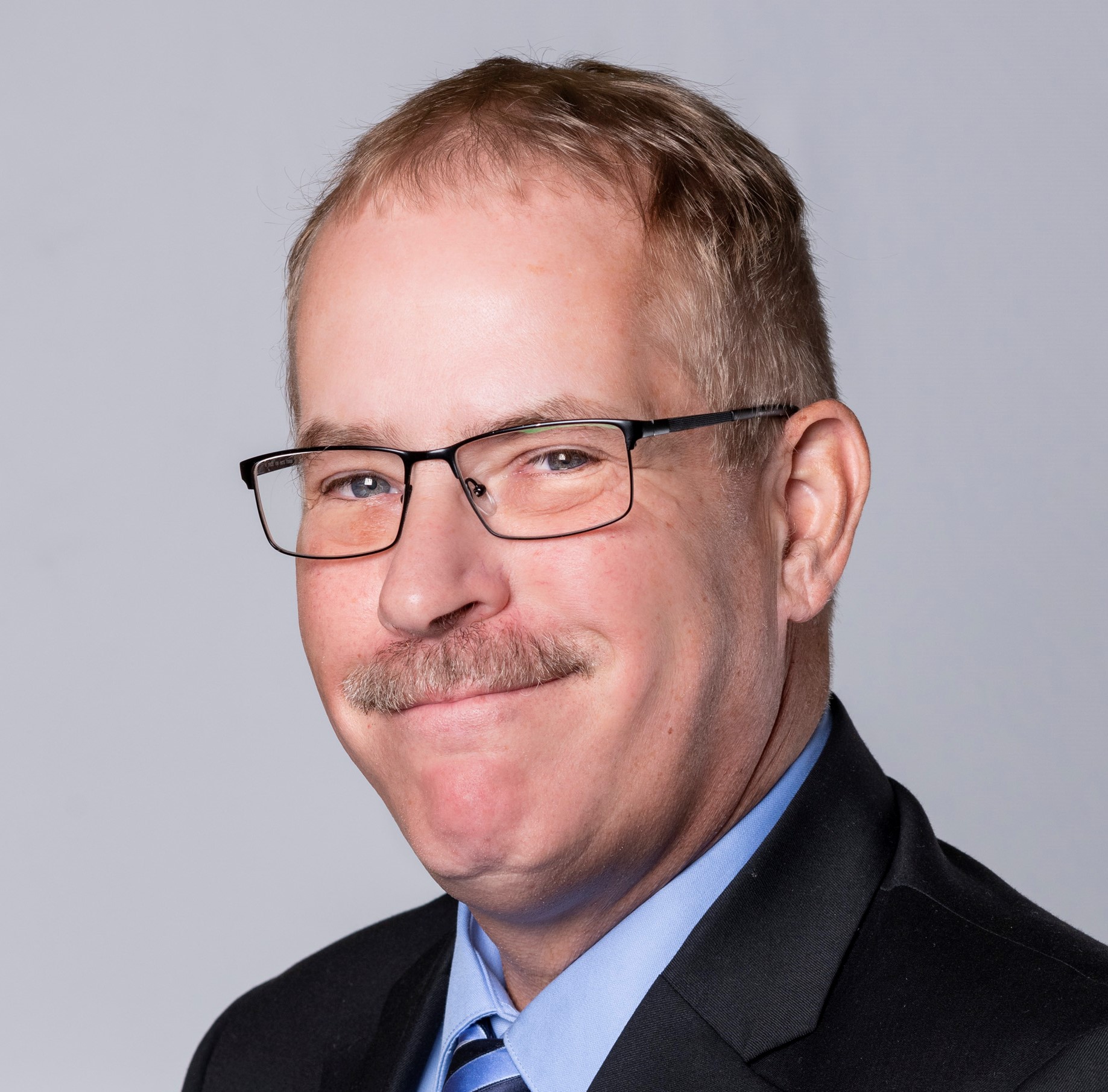 With over 30 years’ experience, Terry brings a wealth of technical knowledge and industry construction experience to the Granby Group of Companies. Terry is senior professional electrical engineer and has a Professional Manager designation from the Canadian Institute of Management. As President and C.E.O. of Granby Group, Terry is an integral part of our dedication to quality and cost effective constructability practices. He is responsible for legal and financial matters and provides leadership and guidance to staff in the firm.

As President, Duane oversees all department managers in the day to day operations of the company. Duane is a journeyman electrician with over 30 years of experience in electrical construction and management. Duane is directly involved in contract negotiations, project negotiation, HR, and Business development. Duane is also responsible and oversees our corporate safety program to ensure the highest level of safety standards are met on each project. 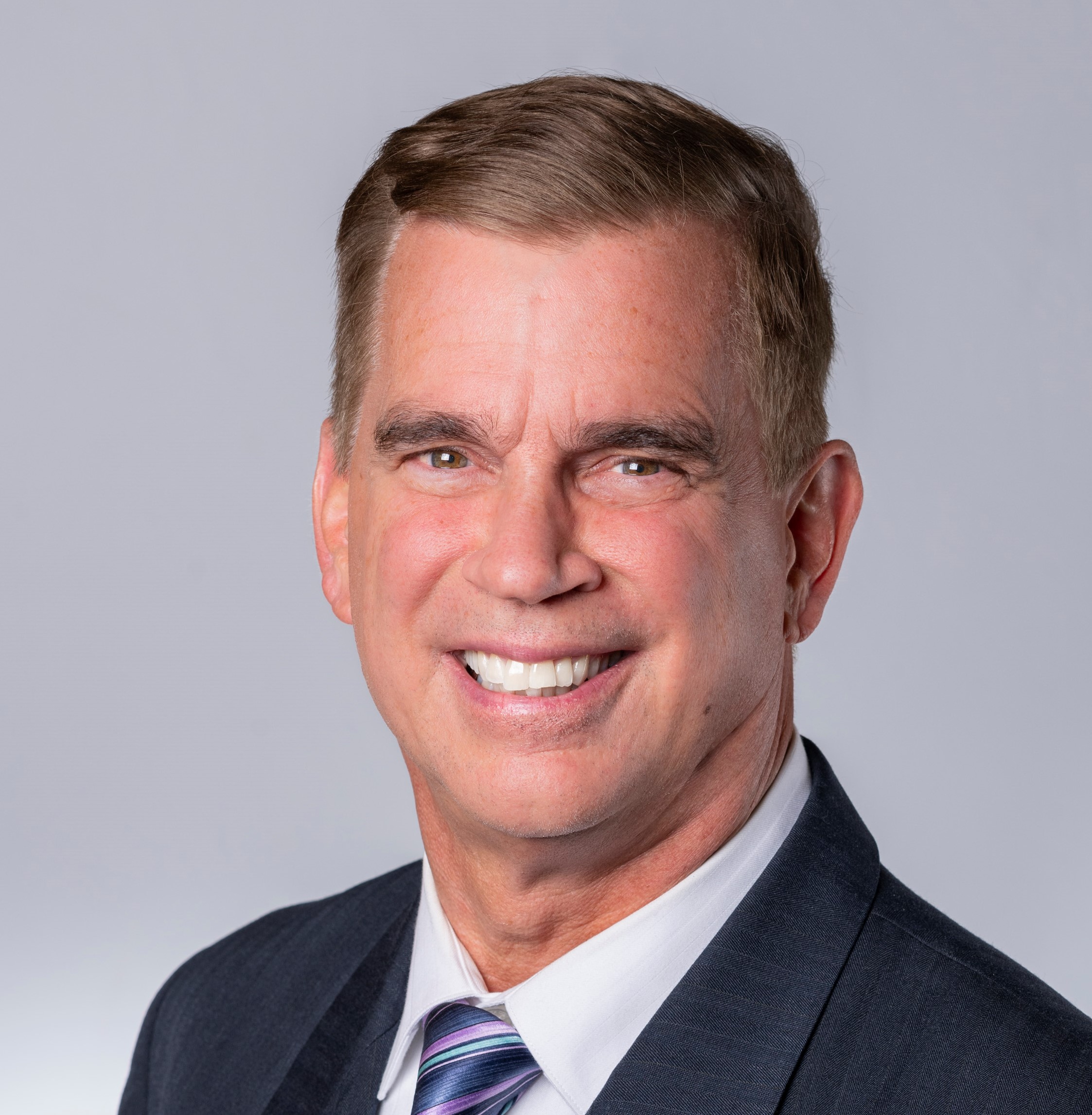 Starting with Bridge since its inception in 1982, Brad currently holds the role of CFO for the Granby Group of Companies. Brad has 20 years of experience as a Certified Professional Accountant (CPA) and holds a journeyman electrical ticket. While Brad’s days of installing conduit and pulling wire may be over, he continues his multi-talented efforts while also overseeing contracts and insurance for the group. 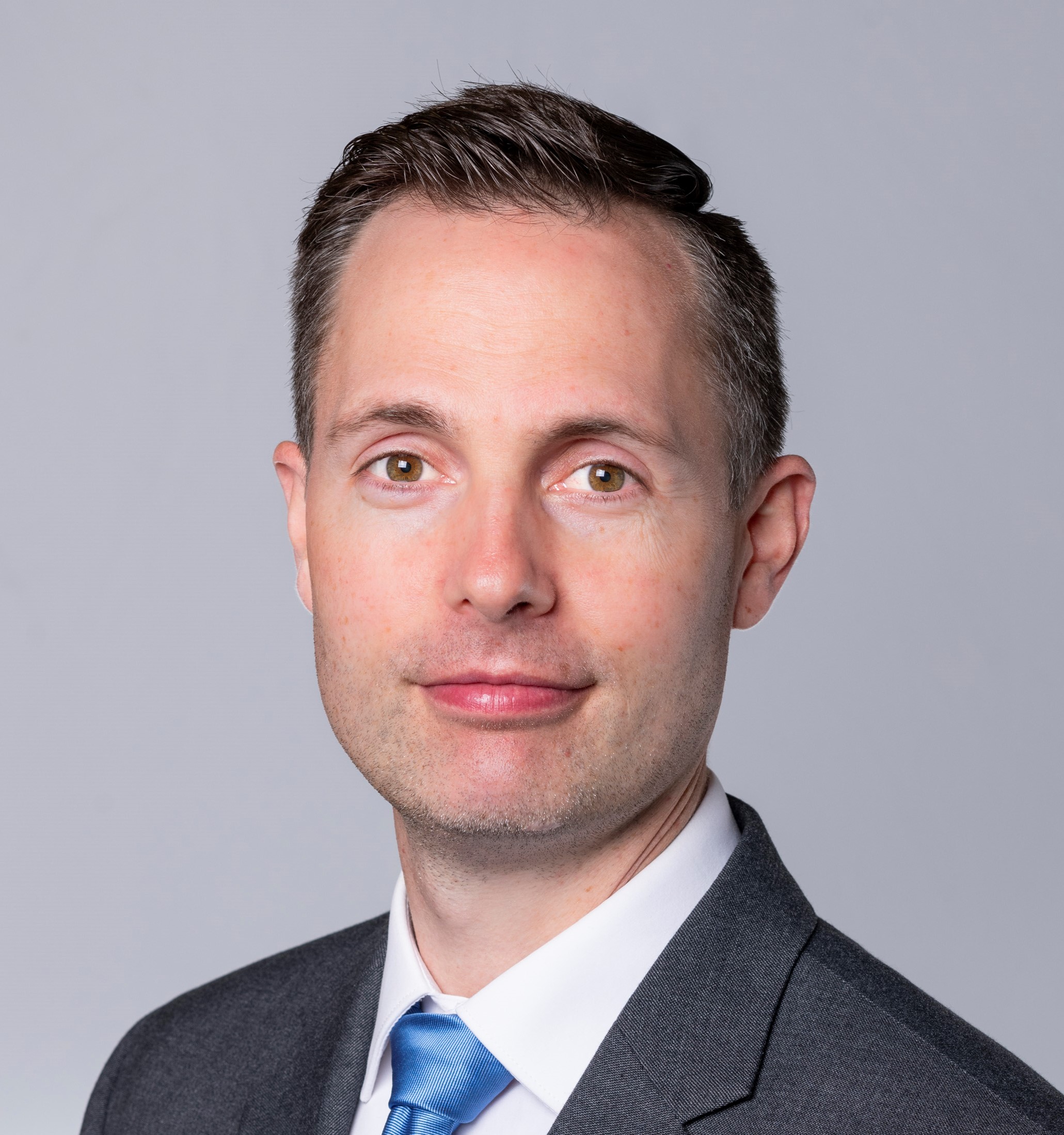 As VP, Business Development, Jordan evaluates tender opportunities, oversees the estimating department, and provides project budgets and preconstruction services. He is a professional electrical engineer, a Gold Seal Certified Project Manager, a LEED Accredited Professional, and he holds a Professional Manager designation from the Canadian Institute of Management. Part of the Bridge Electric team since 2006, Jordan is passionate about building relationships and helping clients meet their target schedule and budget. 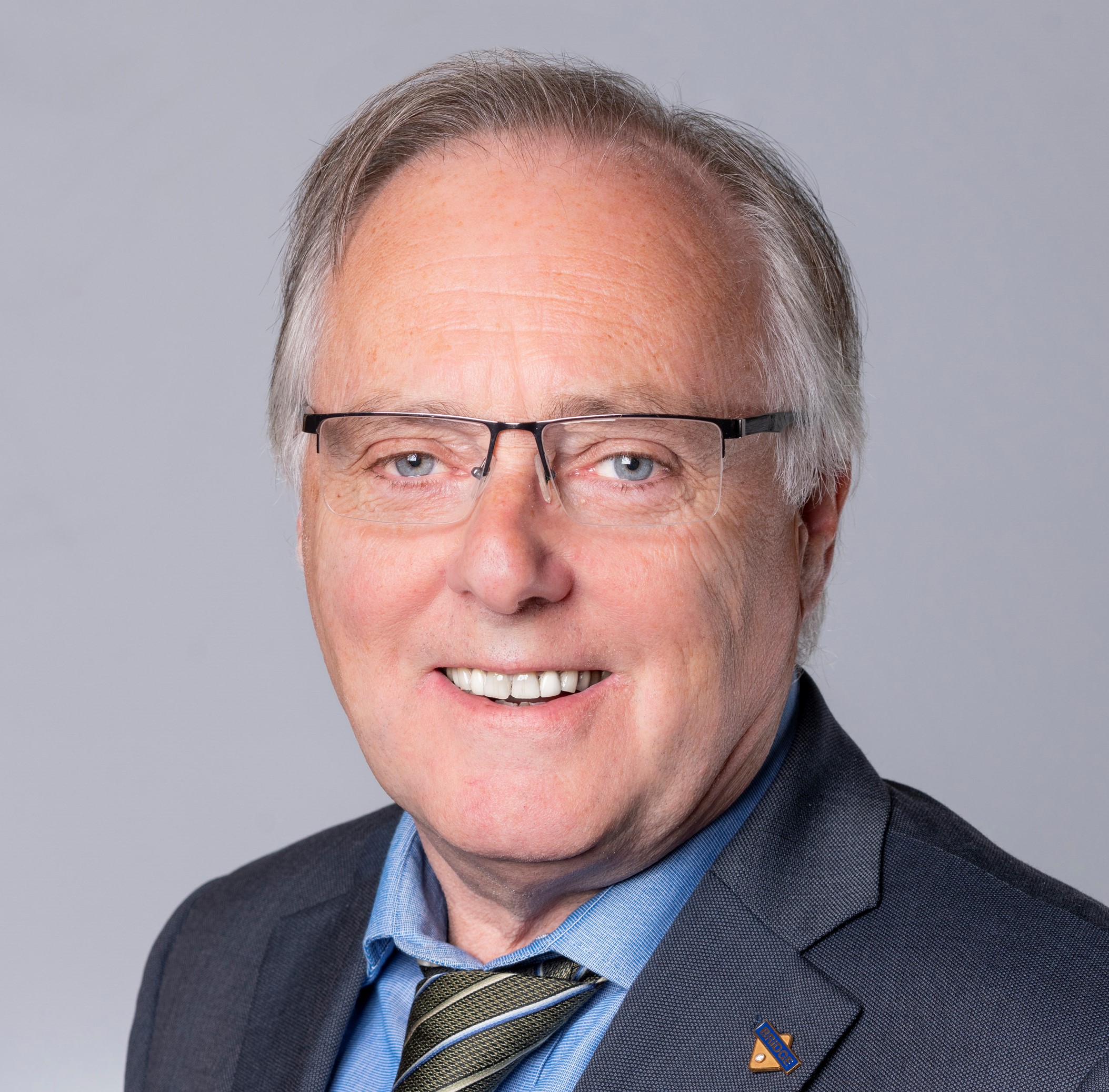 A journeyman electrician with over 35 years of experience in sales, estimating, and project management, Chris manages the day to day operations of the special projects department which includes tenant fit outs and fast track projects. Chris particularly enjoys the challenges associated with fast paced projects and complex renovations. 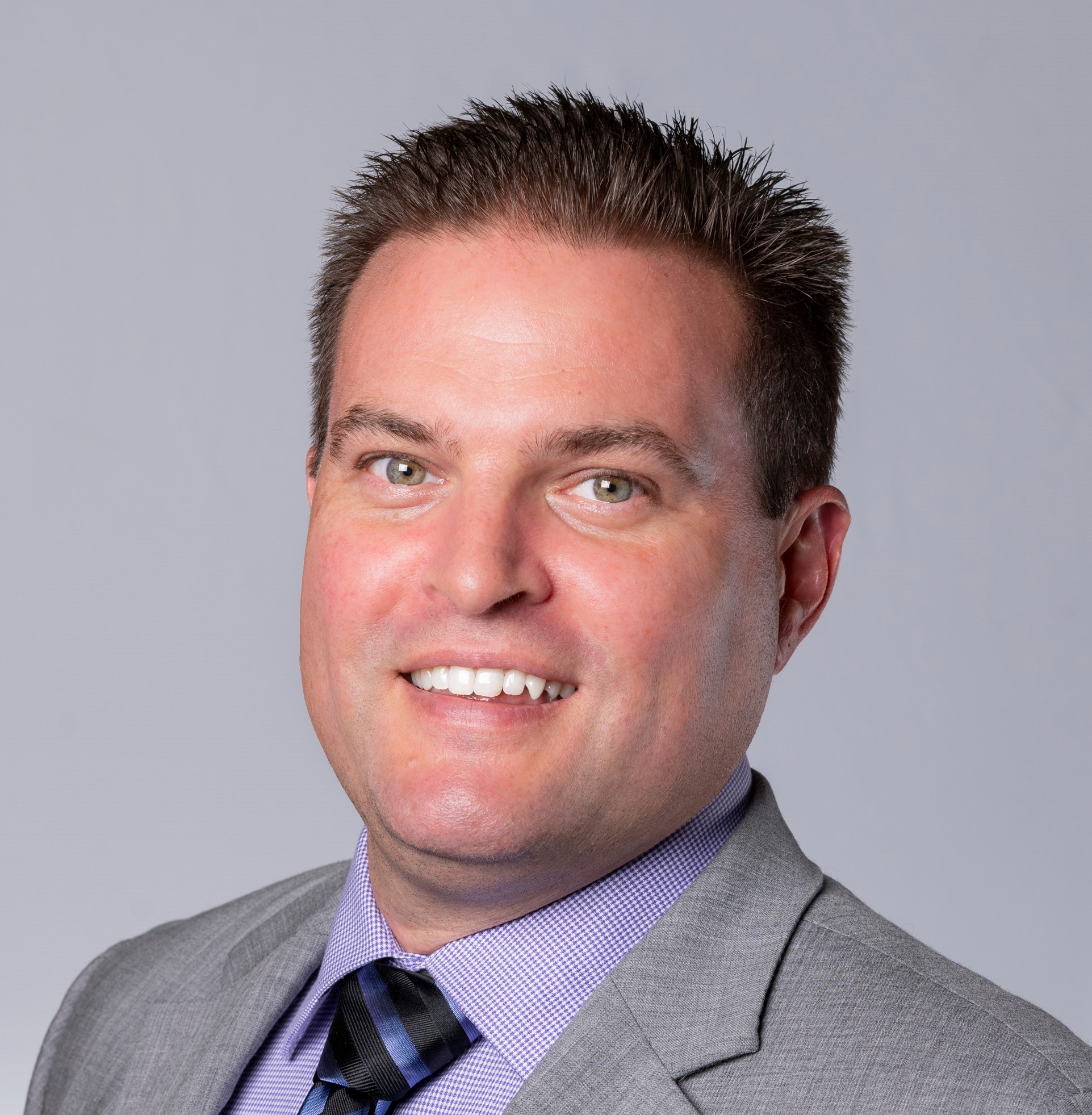 Nathan has been involved in the electrical construction and maintenance industry with Bridge Electric since 2003, is an interprovincial journeyman electrician and is working towards becoming a Gold Seal Certified project manager. Nathan oversees the day to day operations of the Service Department and continues to build and maintain relationships with new and existing customers on design build and design assist projects. Nathan excels in constructing difficult, multi-faceted projects that require attention to detail.

At Bridge Electric we believe that safety should never be sacrificed for productivity.  We invest in this belief, which can be seen in the external COR audits completed by W. Denault & Associates.  Together with a people first first mentality, Bridge has received recognition as a top employer in British Columbia.  However, these are just some of the elements that make Bridge Electric the company it is.  Read more in our corporate brochure or information found on the rest of the website. 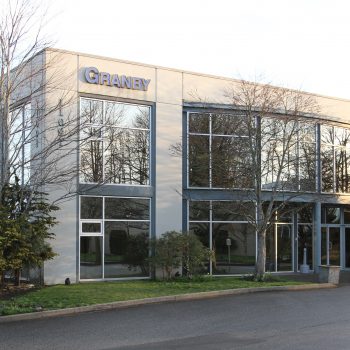 Learn about Bridge Electric in our 2016 corporate brochure.  The brochure covers some of our projects and recent VRCA Awards of Excellence winners.  It outlines our safety philosophy and what being part of the Bridge team means to us.  It also discusses what our “On Time” is and the efforts we invest to achieve it. 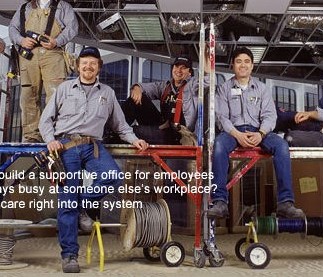 In both 2002 and 2003 Bridge Electric submitted for recognition as one of “Best Companies to Work for in British Columbia”.  In both years Bridge was recognized by Watson Wyatt for BC Business Magazine with the 2003 entry earning Bridge the 7th spot in the province.  The only company in the construction industry so recognized at the time. 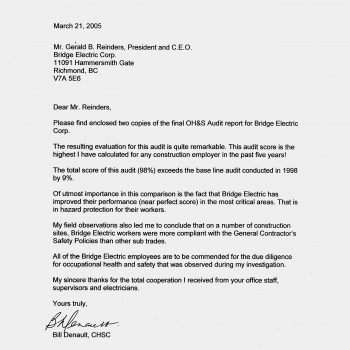 Management and staff are dedicated to six basic values of construction. These are the keys to good customer service in our industry and a priority for all employees.

Safety is a first and foremost value in construction. All employees are trained in safe construction practices and expected to be leaders in its day to day use on the job site.

Backed by a 24/7 service fleet, customers can be assured that Bridge Electric will be available to provide service now and in the future.

Bridge Electric wants every project completed to be a source of pride for the whole company. This starts with quality components and highly trained electricians and finishes with the professional installations left on site. We believe in functional room layouts designed with future expansion in mind, straight conduit runs, neatly dressed panels, aligned lighting, and most importantly, making it as invisible as possible.

Bridge Electric believes in building long term relationships with their customers. In an open market place this can only happen if costs are kept competitive. This means that no matter the situation Bridge will price the work based on competitive market rates resulting in a price that can assure customer satisfaction while still providing a reasonable profit for the operations of Bridge Electric.

Bridge Electric recognizes that once construction starts the next major owner milestone is occupancy. A building in construction doesn’t provide any value and value is what we strive to deliver in all aspects of our operation. As a following trade on site, it can be a challenge pushing the schedule. Our “On Time, Every Time” goal means we refuse to accept this as a barrier to success. This goal is difficult and Bridge Electric commits extraordinary efforts to it. Every employee of Bridge Electric is aware of the importance of this mission. They are trained to plan and co-ordinate their work and have the authority to take any reasonable action necessary to deliver “On Time”.

We believe people are the core of our company and the reason for our success. We strive to create a strong culture of teamwork and family beliefs. We want everyone who has a goal to be given the opportunity and resources to reach their goal. This also means that everyone moving into a leadership position is fully trained through our in house or external training programs.

Bridge Electric’s future depends on repeat business; consequently, we approach each job with the intention that it is the beginning of a long relationship with a new customer.

Bridge Electric Corp. was incorporated in Richmond in 1982 to do light commercial and industrial electrical installations.

In 1987 Bridge merged with the Granby Group of Companies, under the leadership of Gerald Reinders and Alan Holmgren, to gain access to skills and connections for larger projects.

Since 1998 Bridge has earned 14 Vancouver Regional Construction Association (VRCA) “Awards for Excellence in Construction” as Bridge demonstrated its unique commitment to “On Time” service with their highly skilled and motivated team of up to 250 electricians.

In 2005 Terry Lange succeeded Alan Holmgren as President and in 2012 became President of the Granby Group.  Duane Besse was appointed President of Bridge in 2015 and is leading Bridge with continued success.

Bridge Electric believes that partnerships are the key to long term success. As a result they are members of several local organizations; VRCA, BCEA, ICBA, BCCA, BC CSA, and the BC Hydro Alliance of Energy Professionals.